Chaim is a true stand out artist in today’s fast paced electronic world. After the first wave of stunning releases for labels like Supplement Facts, Cocoon and MBF, for over a year now Chaim has worked exclusively with the Berlin based BPitch Control imprint.

Underpinned by top-class studio knowhow, his crisp, forward thinking records are a joy to drop in front of even the biggest crowds. From chart topping remixes like ‘Very Wrong’ and ‘Smile for Me’, to recent high-profile re-workings for the likes of Ellen Allien and Kiki, Chaim has also confirmed his name as a remixer to watch out for… Now with more exciting releases planned – like the blossoming, other-worldly trip of his ‘Thrill You’ EP, or the 8 remixes in collab with Guy Gerber, to be released on P.Diddy’s forthcoming album, Chaim is on an unstoppable mission.

Heavy DJ touring over the last two years has seen the enigmatic Israeli grace the DJ booths of Fabric & Panorama Bar to name but a few, and his work with the BPitch crew has highlighted him as an exciting figure amongst the current electronic scene. 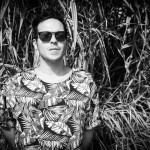