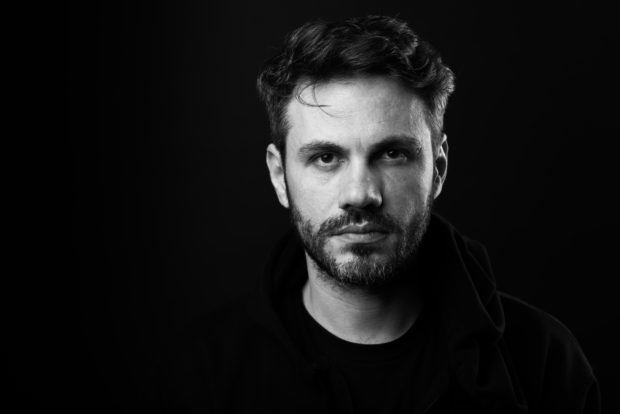 Starting with the late eighties George aka Floog had a sensibility to the electronic music, in that time in the form of Depeche Mode, Kraftwerk, Jean Michel Jarre and Pink Floyd.

In the beginning of the nineties he was also influenced a lot about the groovy gems of KLF, Snap, Technotronic and Prodigy but still having Depeche Mode as role model musically speaking and because of this he thought about making music by himself.  Firstly he had the opportunity to access some real Roland analog synths through a family friend and that was the sparkle that started his fire about electronic music equipment.  In 1995 he acquires his first personal computer and finally started to experiment his musical ideas, using at that time a trendy software called Faster Tracker that was based on samples.  Till 2000 he crafted his computer music skills and then he felt the need to evolve and use this into a more practical way.

True a commune friend he met Roby in 2002 (aka Livio&Roby) and this is how all started in the sense of making real club music, discovering a new universe of possibilities related to underground techno and house.  Together they put the base of a studio and after 2 years Livio join them and they created the project Monochrome, and this project in less than 2 years already being very popular in Romania and won a global DJ competition in Las Vegas declared Global Winners of Heineken Thirst Studio 2006, where they took both prices jury and popular choice one., after this starting an worldwide tour including US and Europe.  Shortly after this they launch an album and had their first track out that was the first ever romanian track being first in Beatport chart in the tech house genre.  In that time tracks were played by Sasha, Satoshi Tomiie and also Gabriel and Dresden that made a remix on one of their tracks.

After this George (as George G) along his partners Livio & Roby had a triple release on Cecille and one on Fumakilla, those releases being played heavily by all the big names in the industry like Loco Dice, Sven Vath, Ricardo Villalobos, Luciano, Richie Hawtin.  In this formula George along his partners made a new project called Premiesku with a scope on having a project based on performing live just with machines designed by them, being invited to join Desolat family where they had a lot achievements including many releases and an album on Desolat, Apollonia, 2020 Vision, Vakant, Mulen, All Inn.  They stated to tour extensively playing for big clubs and festivals all over the world along big names from the industry, in venues like Amnesia, Space, Privilege, Sankeys, Fabric, Timewarp, Tomorrowland, Sonus, Kristal club, Sunwaves, Treehouse, Verboten, The Block, BPM, Warung, Off Sonar etc

Having a lot of ideas and materials beside the Premiesku work he was doing with his partners in 2016 George felt is time and to express himself as well and he started the project called Floog.  The path to Floog sound has been a long one and the first releases were aimed squarely for the dance floor, resulting in tracks with catchy melodies and hooks, tracks to be remembered but also being functional on the dance floor blending the energies from both techno and tech house sounds.

In one year he released music on Bleu Ciel, Hoarder, Gfd, Tos and also on his own label Floog that had 2 fast sold out releases and also with other releases in pipeline till end of 2019 at Mulen,Visionquest, Atipic (Priku’s label), Yoyaku sub label, Joule, Vatos Locos, Sci Tec, his music being crossover of romanian minimal house style and more classical approach to techno and house, music played by acts like Apollonia, Petre Inspirescu, Raresh, Livio & Roby, Priku, Sonja Moonear, Sammy Dee, Dubfire, Seth Troxler, Ryan Crosson, Shaun Reeves and Tini.

His performing is just live, using drum machines, analog synths, a small modular rig and a bunch of controllers, his set being energy oriented, melodic, alternating raw sounds with more minimalistic approach, having a lot of improvisation moments were artist feels is right for the audience and the type of venue.