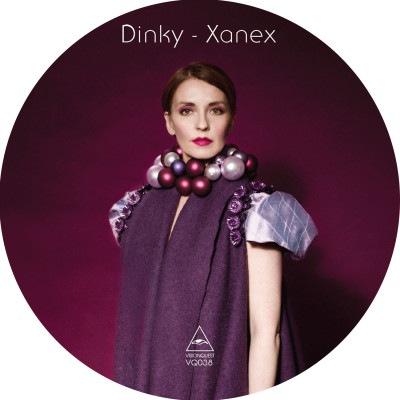 Visionquest’s resident electronic songstress Dinky is back on the label with the third single from last year’s impeccable ‘Dimension D’ album. The seductively soporific and texturally nuanced ‘Xanex’ weaves another enticing tale with Dinky’s voice floating atop a soundbed of grinding digital bass and shimmering guitar. Surging new life into the original are a pair of top drawer remixers – Tuff City Kids (aka Gerd Janson and Philip Lauer) take‘Xanex’ on an dancefloor acid trip while Roman Flügel channels a more stripped back, spaced out approach.

Dinky came to Berlin a decade ago where she quickly became a dominant force in dance music, making her mark through releases on Carpark, Cocoon, Ostgut, and the critically acclaimed ´Anemik´ album in 2009 on Mathew Jonson´s Wagon Repair. Her fifth studio album, ‘Dimension D’ was released in June 2013 on Visionquest and saw her evolution into singer-songwriter and performer with a new musical direction.

Based just outside of Frankfurt Tuff City Kids is the alias for production duo Gerd Janson, boss of Running Back and long time DJ and Arto Mwambe member Philip Lauer. Besides their far-reaching and esteemed solo careers, Tuff City Kids have provided remixes for high-profile artists such as Azari & III, Tensnake and Ali Love and released original EPs on Delsin and Osgut Ton sub-label Unterton.

One of the most heavyweight artists in the German electronic music scene, Roman Flügel has been active since the 1990s and a production chameleon with styles ranging from ambient/IDM to house, techno, electro and leftfield. Working solo under various aliases or with long-time partner Jorn Elling Wuttke, they are also co-founders of the Ongaku/Klang/Playhouse labels.