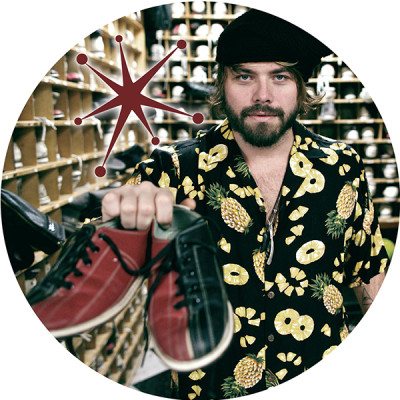 Back from a brief hiatus from solo output, Lee Curtiss follows up the masterfully naughty ‘Lunatic Fringe’ EP with another heavy dose of dancefloor debauchery for own imprint Visionquest. Showcasing his undeniable flair for libidinous club music with a hint of the unusual, Lee takes time out from producing his upcoming album to deliver two killer originals  for  ‘The  Ride  EP’.  A­-side  ‘Drink Tickets’ is a suitably dusky  and  contorted  trip  with  a  growling  modulated  bassline,  pseudo-sinister vocal  and  kinetic  groove  while  B­-side  ‘Dancing  Girls’, a  collaboration  with  his  Chicago partner  in  crime,  Nick  Bassett  ­  is  a  simmering  hypnotic  summertime  affair  with  a  filtered  90s feel and  dirty  funk  bassline  combined  with sonically  sophisticated  detail.

A veteran of the electronic music scene, Lee Curtiss has successfully straddled the industry’s many contradictions, releasing hits as exquisitely crafted and mentally twisted as they are in global demand. As a founding father of Visionquest’s forward thinking outfit and label and a DJ renowned for mining the depths of dance music’s history at establishments such as DC10 and fabric, Lee Curtiss is a true eccentric and innovator guaranteed to deliver a sonic melting pot of humour, sex and funk.

Initially making his mark as a producer with releases on Spectral, Get Physical, Supplement Facts, and Wolf & Lamb, two of Lee’s biggest hits, the Visionquest remix of ‘Good Voodoo’ remix and ‘Smoking Mirrors’ were in RA’s top tracks of 2011 and out of the techno realm, Lee’s remixed the likes of Tracey Thorne and David Lynch. Since then there have been massive releases on Culprit (Candy EP feat. Matt Tolfrey) and of course with the ‘Lunatic Fringe EP’ on Visionquest.

Nick Bassett is a true gentleman helping to shape the new chapter of Chicago’s long history of dance music, a spokesperson for the futuristic sounds of modern deep house, and a devoted student of electronic music’s past. Nick grew up in the academic cornfields of Urbana, Illinois, with extended visits to a village in West Africa. He’s lived the last seven years as a proper Chicagoan in the Windy City. Nick’s life has been influenced as much by art and design as it has by the explosion and reinvention of new house music and digging for classic 90s vinyls. Nick’s music selection has been described as  “elegant yet understated…dripping  with  passion,  sweat, and creativity.” Bringing these qualities to his music production promises to catapult his career another great step forward.