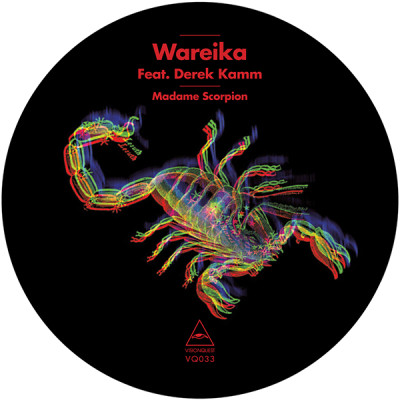 Visionquest 033 is brought to you by the unique sonic voice of Hamburg trio Wareika, who weave a distorted jazz looseness into the pulsing and ever-evolving analogue framework of ‘Madame Scorpion’. A teasing raw live composition with a tribal heart, the undulating percussive groove rolls beneath haunting strings and an expanding soundscape until space opens up for a rising melody and Florian’s deep absorbing vocal. Veteran German house producer Henrik Schwarz turns in a magnificently wonky remix on the flip.

Wareika started as a project in 2007 and the vivid interaction of the three musicians, Henrik Raabe (Guit, Perc), Jakob Seidensticker (MPC, Arrange, EFX) and Florian Schirmacher (Voc, Synths, Perc) forms one of the very few bands in the electronic worldwide circuit.

With a collection of shining releases on prestigious labels such as Connaisseur, Eskimo, Future Classic and Circus Company, and three studio albums on Perlon, liebe*detail and Tartelet Records, Wareika’s style ranges from Balearic to deep Techno, jazzy House sounds and from Balkan-Jazz to dubby riddims but always retains the smart intellect, depth and dynamism in composition Wareika is known for.

Henrik Schwarz has amassed a cult following for his compelling live sets and releases over the past decade and is now one of the most in-demand artists on the dance scene. Championed by the BBC’s Gilles Peterson early on, Henrik’s magic touch now graces the catalogues of inspiring labels such as Innervisions, Moodmusic, BBE and his own Sunday Music.