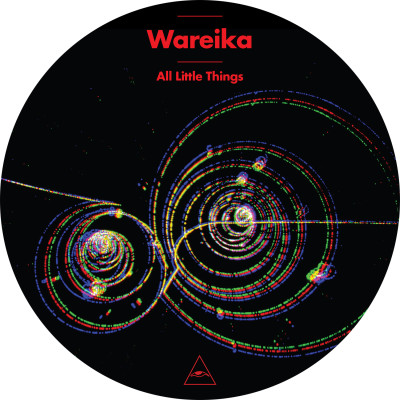 Next up on Visionquest is the second single from Wareika’s righteous and raw ‘Wternal’ album. ‘All Little Things’, here in its ‘Club Mix’ incarnation, is another example of the trio’s hefty musicianship and unbridled eccentric energy, where jazzy textures and pulsating grooves build up with a rising melody to the powerful vocal drop. On the first remix Visionquest & Nikko Gibler develop expansive piano melodies alongside an elasticated bassline and vocal snippets. Fred P reigns over the B-side with his raw, deep hypnotic ‘Reshape’ and warmed up ‘Spirit Dub’. This is a distinctly diverse remix package from a rich artistic source.

Hamburg trio Wareika started as a project in 2007 with a collection of shining releases on prestigious labels such as Connaisseur, Eskimo, Future Classic and Circus Company, and three studio albums on Perlon, liebe*detail and Tartelet Records, Wareika’s style ranges from Balearic to deep Techno, jazzy House sounds and from Balkan-Jazz to dubby riddims but always retains the smart intellect, depth and dynamism in composition Wareika is known for.

Their thrilling jazz-marries-techno live shows has now been captured on vinyl and CD with fourth full-length album ‘Wternal’ recorded in one 65min take and out now on Visionquest. After remixes for David Lynch and Benoit & Sergio in the past couple of years, Visionquest, the artists, here join forces with Nikko Gibler – a multi instrumentalist and composer based in Hollywood, who’s also released records on Culprit and Leftroom.

Fred P aka Black Jazz Consortium is one of the godfathers of the New York house movement and a true master of that often overused accolade ‘deep’. Fred P runs Soul People Music and has appeared on Jus-Ed’s imprint Underground Quality.